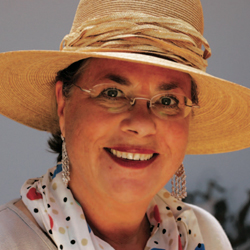 Russian author Leo Tolstoy once said “Art is a microscope which the artist fixes on the secrets of his soul and shows to other people these secrets which are common to all”. Exactly this type of projection, of target message, can be discerned when beholding the works by German artist, Eschara. But who is this woman who succeeds in according such charisma to her works? And why is Lanzarote the epicentre of this eruptive venting of energy in the form of quadratic paintings? These questions allow for a fascinating encounter with an utterly exceptional being.

Although Eschara already set about acquiring a sound approach to art through her studies back in the early 1990s, her actual life as an authorised signatory in the electronics industry was led in a world that was seemingly in an entirely different format. She refers to her artistic signature developed over the past ten years as “Molecular Transparent Structuralism (MTS)”. Interested beholders rapidly discern what lies behind these technical abstract term: an extremely appealing and coherent form of colour and light.

When in conversation with Eschara, one senses the enthusiasm, the creative urge of the artist, who has chosen Lanzarote as the focus of her sphere of activity for some time now: “A series of 27 paintings has now been created under extremely spartan conditions and personally focussed on visualisation of the experiences in life in the inspiring setting of the volcanic island, which will be displayed in a month-long exhibition at the Real-Club Náutico de Arrecife beginning in October 2010.”

According to the artist, who wishes to continue living and working on Lanzarote, the exhibition’s title of REISEZIEL - ZIELREISE [TRAVEL DESTINATION - TRAVEL WITH A DESTINATION] aims to take beholders on a journey “through internal and external reality, and to open up spaces to them, which previously remained closed”

However, the extremely appealing works of art are also the best proof for interested beholders that the conclusion of writer Martin Kessel who defined art as “what is left over after everything about it has been analysed to death”.

For only the personal experience of the exhibition can be the measure here too. A visit to the “REISEZIEL - ZIELREISE” exhibition should definitely feature on the itinerary during a visit to Lanzarote between October 22 and November 22, 2010.